A Bit of Trivia

People usually call these spectacular creations cherry blossoms. However, some are actually plum blossoms. I didn’t know I heard it on TV this year, 2022.

So here’s how to tell these beauties apart according to the Vancouver Cherry Blossoms Festival (VCBF).

The Vancouver Cherry Blossom Festival writes the detailed history of cherry blossoms in Vancouver. Here is a summary.

Early into Vancouver’s history as a city from the 1800s until the 1940s, trees planted on boulevards and in parks were tall, shady, and long-lived.

In the early 1930s, the mayors of Kobe and Yokohama, Japan presented the park board with 500 Japanese cherry trees for planting at the Japanese cenotaph in Stanley Park in honour of the Japanese Canadians who served in WWI. Cherry trees then began to reshape the city’s landscape.

By the mid-1950s, many trees on the city streets were replaced due to issues with roots invading sewer lines, heaving sidewalks, and canopies that interfered with utility lines. The park board then started to favor smaller trees including plums and flowering cherries.

In 1958 three hundred more cherry trees were donated by the Japanese consul, Muneo Tanabe, reported in the newspaper as “an eternal memory of good friendship between our two nations.” The ornamental cherries were planted along Cambie Boulevard, between 49th and 33rd Avenues, in Queen Elizabeth Park, and around the Japanese monument in Stanley Park.

Vancouver’s Park Board has changed planting practices and preferences due to sustainability goals and problems with some varieties of plants.

The Park Board’s continued efforts resulted in the planting of flowering cherry trees in popular areas around the city and in parks as well as the introduction of a broader variety of species. This aims to ensure that Vancouver has a vibrant urban forest for generations to come.

A Guide on Chasing Cherry Blossoms

VCBF has a helpful tool for cherry blossoms chasers. This will tell you where and when to look for these mesmerizing creations.

The screenshot of the tool might give you an idea of how many viewing spots there are. 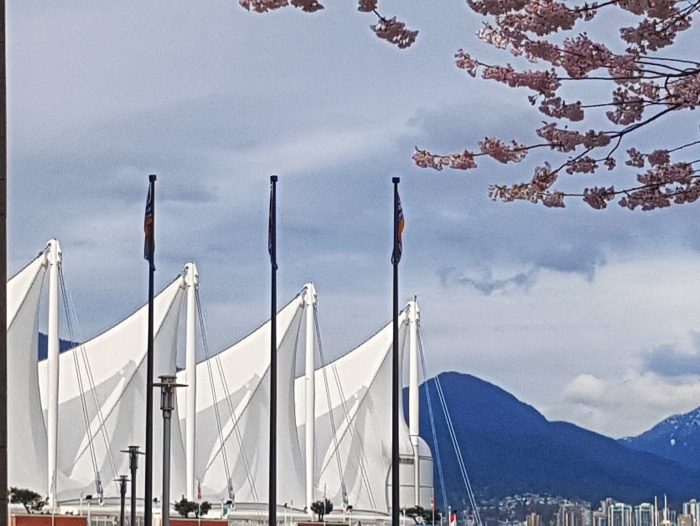 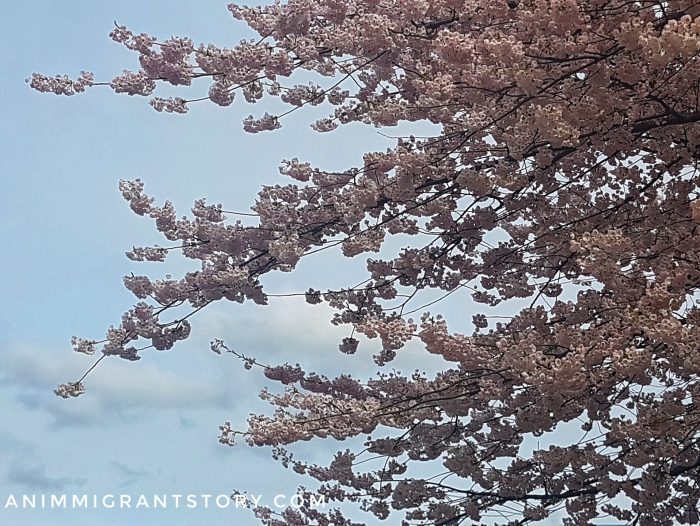 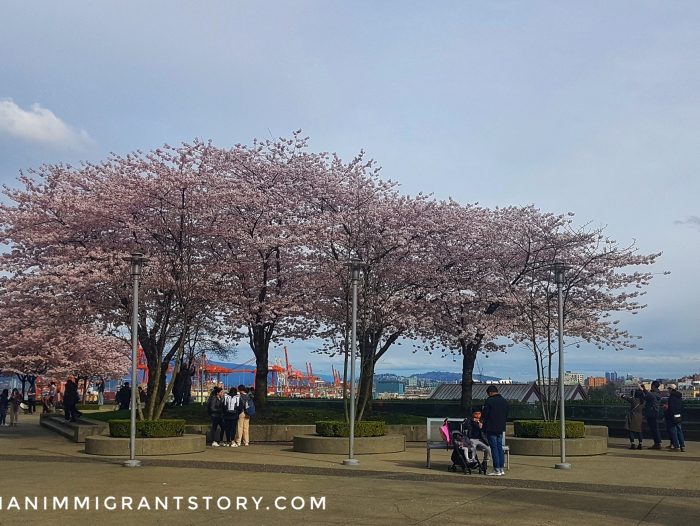 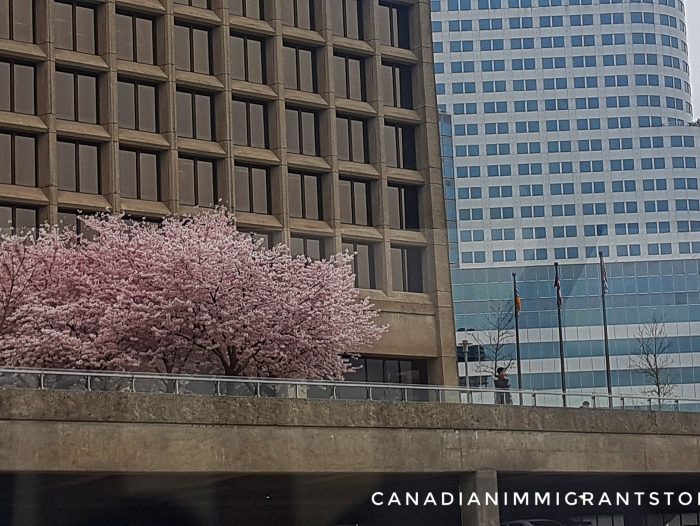 This is a gem that is not as popular as the others. There are only a few blossoming trees in the area. However, the canopies are quite big and create interesting frames for the mountains and Port of Metro Vancouver.

This is a favorite photo opp spot during cherry blossom season. The branches from the blossoming trees magically weave into each other. 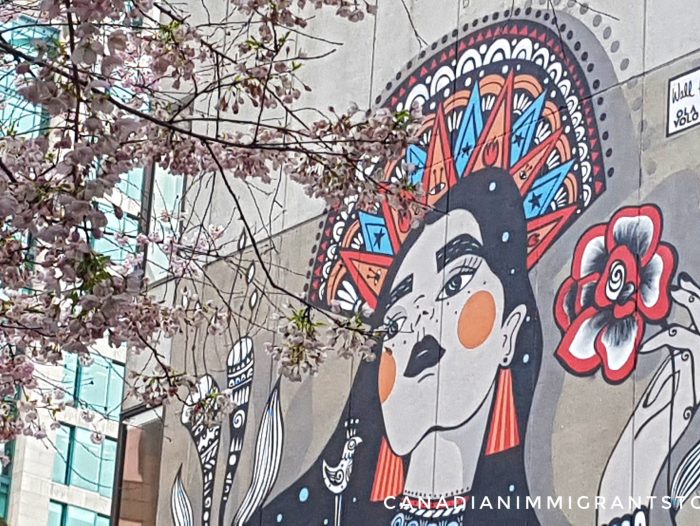 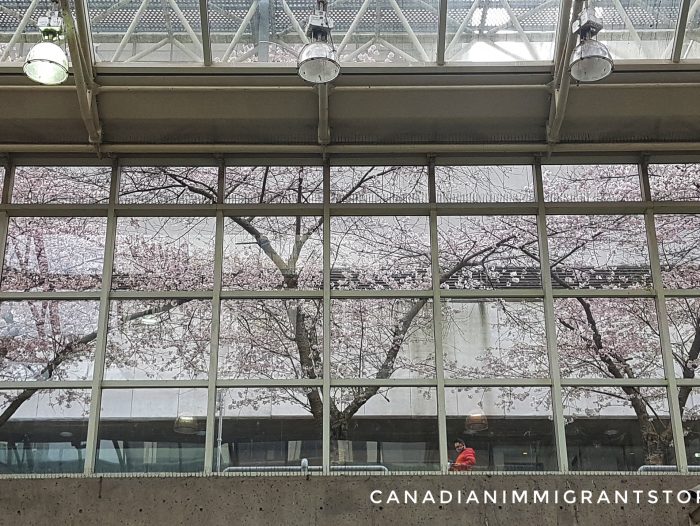 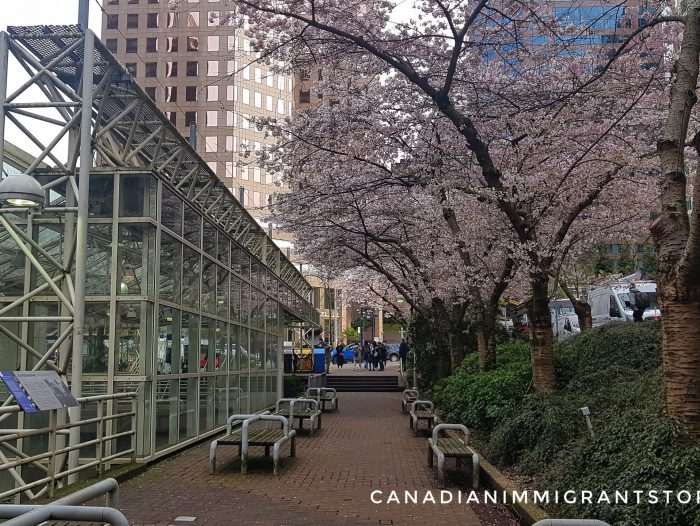 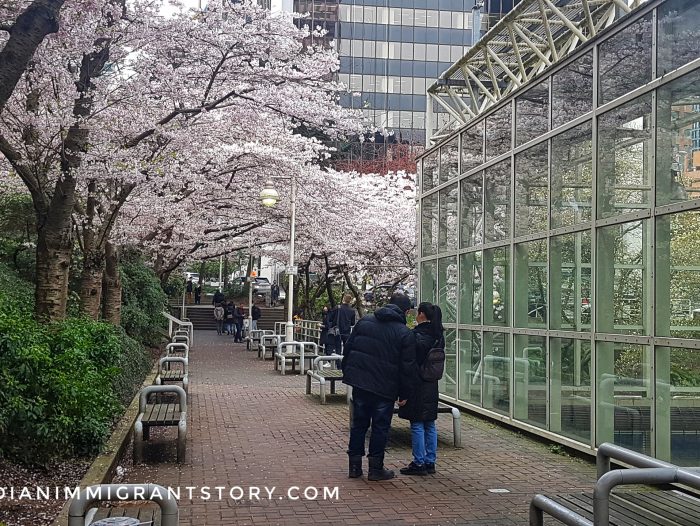 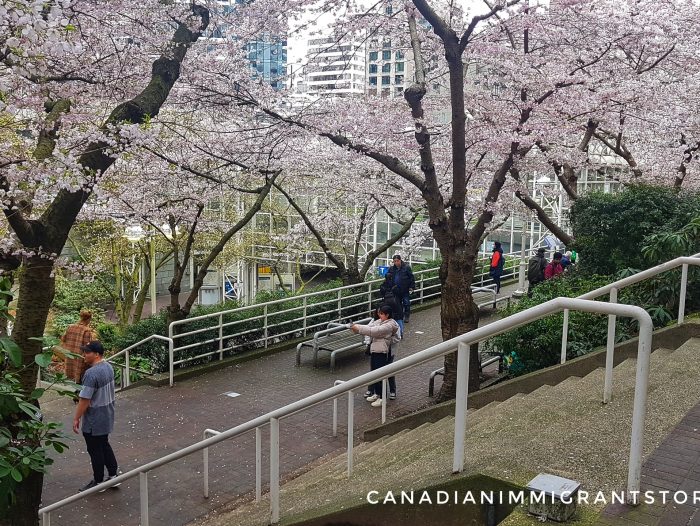 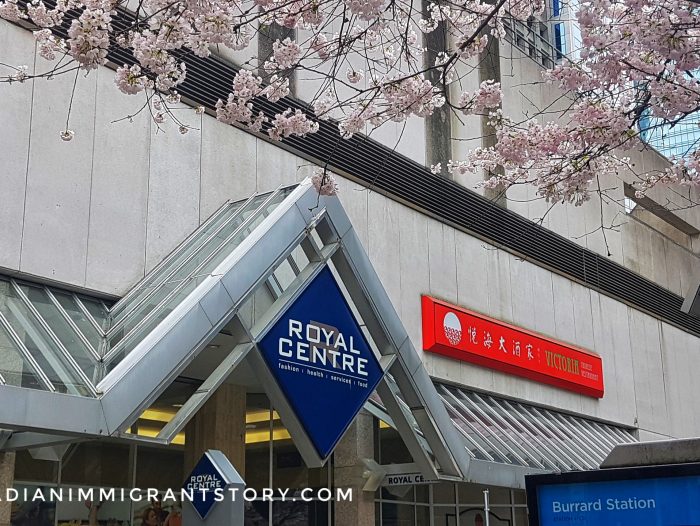 Burrard Station is one of the most popular and convenient cherry blossom viewing locations. Most passersby couldn’t resist the opportunity to take photos of or with the beautiful flowers. 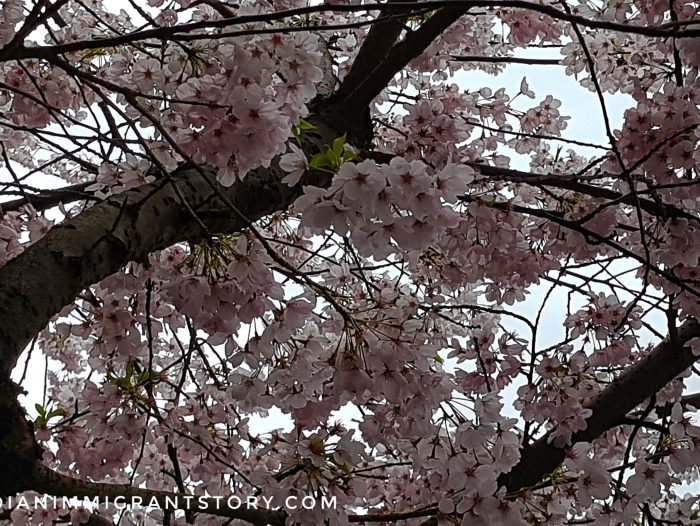 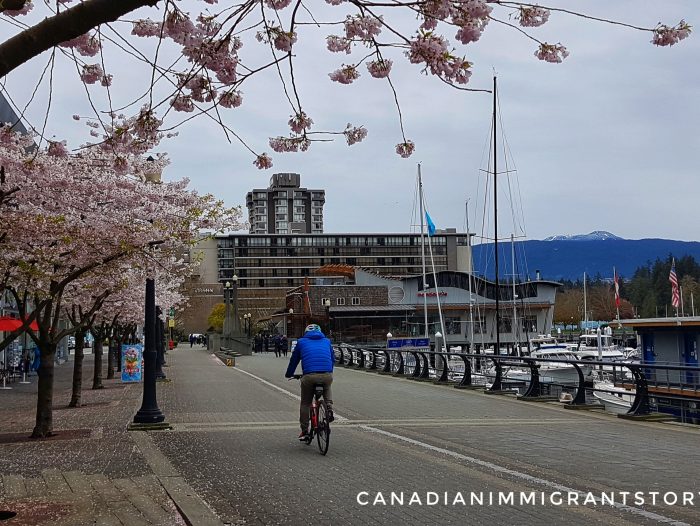 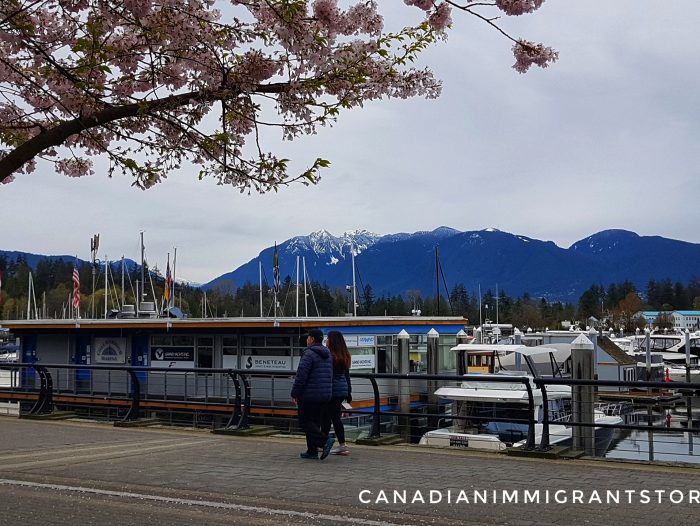 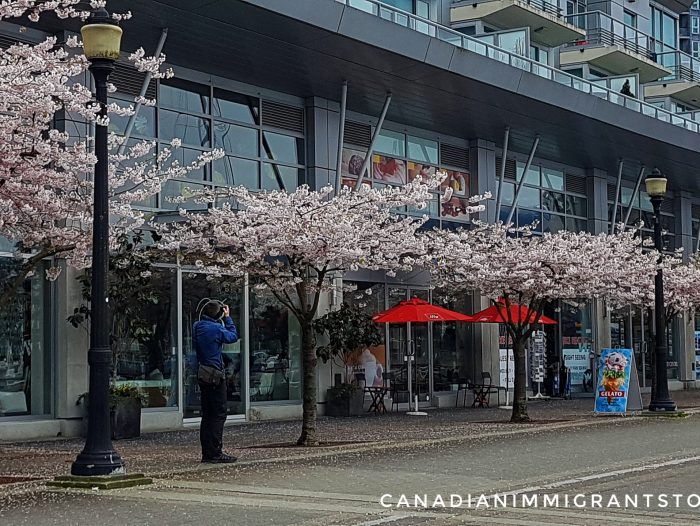 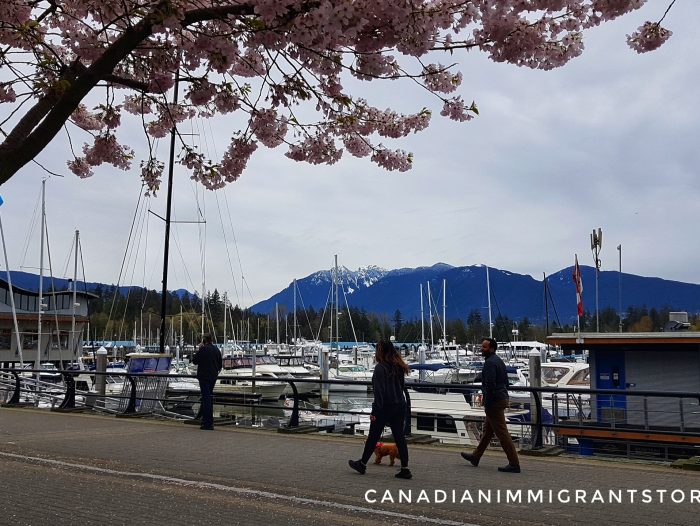 Coal Harbour has always been a relaxing area. In fact, it is a popular place for strolling, biking, or just admiring nature’s gifts. It gives an amazing view of the water and mountains. The blooming trees elevate the relaxing beauty of this place.

This park is one of the most popular parks in Vancouver for several reasons. The park is the city’s horticultural jewel. Also, as the highest point in Vancouver, it offers spectacular views of the park, city, and North Shore mountains.

This is another spectacular spot in Vancouver, especially in spring. The contrasting blue hues of the water and pink colors of the cherry blossoms add charm to this amazing spot.

The spot across Canada Place is also quite hidden. I only discovered this because I went for a walk while waiting for an appointment that I was too early for. What an amazing way to spend extra time!

The season is too short to visit all the wonderful places. But, it makes me excited to chase cherry blossoms in Vancouver in the year to come.

Cherish the joy of chasing cherry blossoms in Vancouver!